“THE WIRE 106” animated gif by @aforgrave

Jim Groom (@jimgroom, on Twitter) is bringing it for the latest incarnation of the DS106 Digital Storytelling open online course (as well as for multiple sections of for-credit learners at UMW). Following on the summer 2013 session set within the world of The Twilight Zone (#ds106zone), the fall 2014 session has the course within the context of the HBO television series, The Wire (#wire106).

You can catch up by checking out Jim’s tagged writing so far (and all that follows) at wire106 on bavatuesdays.com, monitoring the #wire106 tag on Twitter, and keeping tabs on all the posts syndicated to the ds106.us site blog flow.

In celebration of the upcoming segment, The Daily Create for August 13 prompted “@jimgroom prepares for his next run of DS106. Make an appropriate poster from this image,” providing access to a wonderful photo portrait of Jim taken by Tom Woodward (@twoodwar on Twitter).

My take on the challenge: 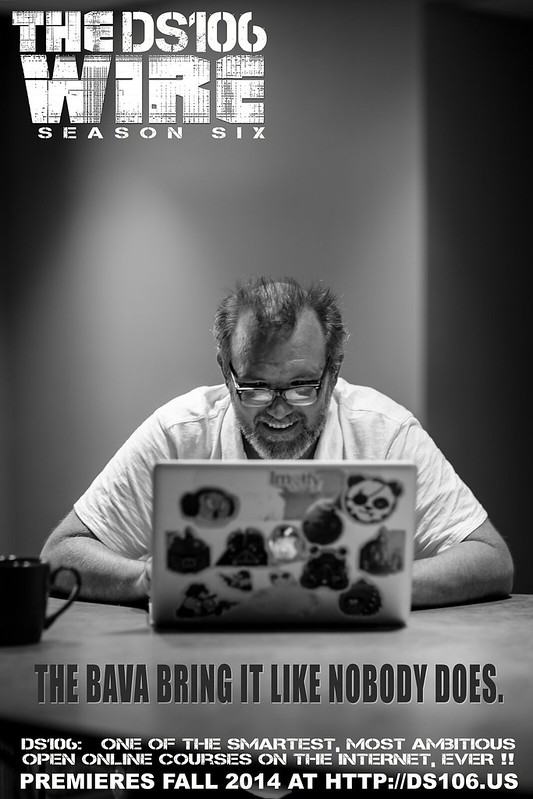 The Second Best TV Series of All Time ?

Having never seen an episode, I was intrigued by Jim’s suggestion that The Wire “might be the second best TV series of all time …,” (after The Twilight Zone) and decided that such an endorsement was worthy of some study. While a local DVD shop provided me with season 1, I had to travel down the highway to find seasons 2-5. I lucked into an amazing DVD shop with a huge selection of old TV shows (as a child of the television age, I’ll be going back — this winter: The Avengers) and the two folks at the checkout both praised The Wire, extolling the writing and commentary on life in the US. I’m now about halfway through season 2, and trying to distill the show into GIFs and images.

Jim and Paul Bond (@phb256 on Twitter) talked about a pre-course warm-up discussion which has made the official start-up date a bit fuzzy for me, but I’m thinking that things are starting up now or next week (or the week after?), so it’s time to start GIFfing.

How about a T-Shirt?

A conversation last night with GNA (@DrGarcia, on Twitter) about T-shirts had me wake this morning in the mood to design one. I spent some time this afternoon working on an image and caption for the front. With the image as rendered, the image is destined for a black T.

On two occasions now I have tried to find a font similar to that used for The Wire season 1 logo — to no avail. Neither whatfontis nor whatthefont led to anything close. While it might have been a nice choice for the caption on the front of the shirt, I’ve decided that it must be a custom title rendering (not a font).  I’m still in the throes of selecting a font for the caption — you can see fonts cranking through the mill in the GIF below.

I was able to extend The Wire characters to create a 106 — so we can have a course logo for the back of the shirt.

Once the 106 were finalized, I applied a 60% opacity to them to let some of the black background show through and thus visually separate the WIRE and the 106 into two separate, but related, elements.

These frames show the building of the 106.

And so, we arrive at The Jim “Bava/Nobody” Groom WIRE106 T-shirt. Any takers?
As of Tuesday, August 19th they are in The ds106zone store on Zazzle.

Zazzle has a .com domain for the US and a .ca domain for Canada.
Check for your local country Zazzle domain and  put /ds106zone after your country’s domain-specific Zazzle URL to navigate to the ds106zone store.