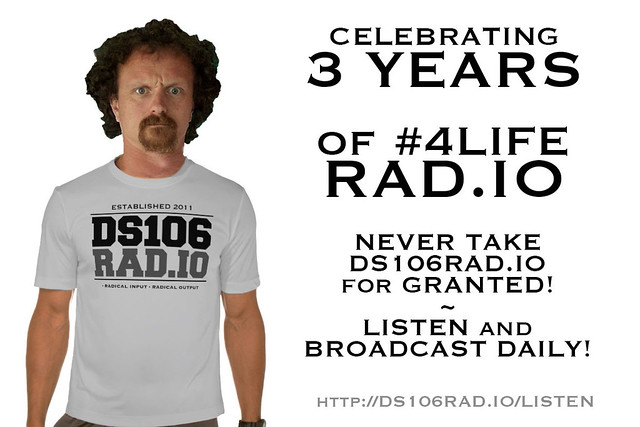 As I write this, we are moments away from the 3rd anniversary of our beloved #ds106rad.io.

As I have noted before, shortly after Grant Potter introduced the Voice of DS106 Digital Storytelling, the Internet-based ds106radio station, it suddenly seemed that every single tweet coming out of @jimgroom had the #ds106radio tag. It was almost spammish in it’s insistency, but clearly the intensity which Jim and others were affected by ds106radio was contagious. My own involvement took a few months to kick in (following a wonderful meeting with @GiuliaForsythe and @BryanJack at unplugd11) and I was hooked.

Knowing that the 3rd anniversary was coming up, I had already been thinking about ways to celebrate the ds106radio birthday.  Seeing a conversation yesterday between @Todd_Conaway and Alan Levine (@cogdog) about T-shirts (these guys must go through shirts like crazy while biking in that outback Arizona climate), I got to thinking that a 3rd anniversary shirt design might be apropos.  Todd was looking for an athletic/performance style shirt, and that prompted a design somewhat reminiscent of an historic collegiate look, complete with the “established” dateline. Yeah, it’s only been three years, but you’ve got to start sometime!

I’ve also been really keen on the appropriateness of the ds106rad.io domain that Grant secured — ever since day one, that rad.io suffix (aside from spelling radio) has always personified the radical in — radical out nature of the ds106 community and its participants.

And so, here’s where we’re at — a performance T-shirt, available in several colours, for both men and women.

I’ve added the design to Zazzle, and if you are interested, you can order your own and have it shipped directly to you. Note that you don’t have to go with the Men’s or Women’s Sport-Tek Competitor T-Shirt, you can switch out the shirt to one of ~120 different styles and whatever colours they come in. The colours and styles shown in the GIF reflect the appropriate colours for that particular shirt.

One note: Zazzle has discount days for their products, and I always wait for their 50% off days when it becomes much more cost effective to purchase things like shirts — or the funky ds106zone water bottle from this past summer.

It usually takes about 24 hours before new items appear in the “store” — Here’s the link to the DS106Zone page on Zazzle that I set up this past summer — the new shirt  is there now! (I’ll add the women’s version momentarily.)

In the meantime, here’s a little bit more Grant.  He takes this radio stuff seriously! And he’s a great sport!

“GRANTED Radical In Radical Out T-Shirt” animated GIF by aforgrave

The #ds106radio @scottlo Driveby Show. He’s in a Yaris.