There was a brief time when I switched hard drives (I’m thinking it was sometime during the late summer/early fall of 2012) when I poked around using GIMP to try to understand Animated GIFs because I didn’t have ready access to my Adobe Photoshop and there were some ds106 tutorials about GIFfing with GIMP.  While I did make some limited progress with GIMP, I was still trying to understand the rudimentary aspects of making GIFs at the time, and so I didn’t have any good experience with which to extend my understanding of GIMP.

Fast forward a little bit, and I got my Photoshop installed, and I started poking around learning how to make GIFs using Photoshop, which is similar, but different. Getting my head wrapped around how Layers worked in conjunction with Frames in a Frame Animation within Photoshop took a while (and was the reason My New DS106 Shirt is Here GIF has languished — still) and really only came as I concurrently came to understand masking and reducing GIF file sizes. All told, it was quite a journey, characterized by progress, yes, but also reflecting many unfinished GIFs, and many, many pieces of GIFbits littering my hard drives.

And along the way — primarly resulting from GIFestivus2012 which started around December 1st and ran for over a month and a half — I developed a very bad case of GIF-Eye-tis.  I still have it. It is a most beautiful affliction.

At any rate, I have much learning to document. Most of it is with Photoshop, but the concepts and techniques should be replicable with GIMP, and I am going to undertake to sort out some of them.

So, let’s say you have a series of images that animate nicely, like the ones that make up this GIF, “Red Alert,” from The Twilight Zone episode, Monsters Are Due on Maple Street.

“Red Alert” animated GIF, by aforgrave, from “Monsters are Due On Maple Street”

Viewed in GIMP, the GIF is composed of 8 layers with a canvas size of 600 pixels width and 448 pixels height (I’ve scaled the image shown above back by 50%, but the original dimensions are as given.) 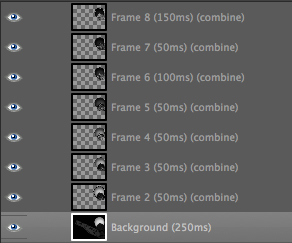 Perhaps you want to fit the GIF layers into — oh, I don’t know — a ds106zone Scene template card, which has a canvas size of 1128 pixels width and 752 pixels height. (Of course, the transparent window on the card is a bit smaller than that. but the point is we want to re-size ALL of the Red Alert GIF layers simultaneously and identically, so the animation remains.

Now, GIMP doesn’t appear to let you select more than one layer at a time (please correct me if I’m missing something). Changing them all, 0ne by one — and identically — is a labourious and involved process. I know, because I initially did that in Photoshop, and decided that there just had to be a better way. And as it would turn out, a similar solution exists for both Photoshop and GIMP.

The answer is collecting the layers into a Layer Group.

In GIMP, do the following:

Creating the Conditions for Potential