Towards the end of 2009, a number of friends on Twitter proclaimed their intent to participate in a project 365 photography adventure, and I decided to rekindle my interest in photography by playing along.  Supported in part by @duncan‘s TheDailyShoot, I managed to get into the daily habit of making time for photography, and sharing a photo a day to my account on Flickr. By the end of 2010, I was pleased, not only with the collection of photographs I had accumulated, but with a number of other incidental results:

My enjoyment of the 2010/365 project led me to continue on into 2011/365. Armed now with a self-bestowed boxing-day present, a Sony NEX-5 DSLR (actually, an EVIL or MILC camera, the choice after conversations with @digitalnative and several months investigation), I continued taking photographs, using the new Sony, the older Canon, and the ever-present iPhone to capture daily events and thedailyshoot photo challenges.

However, In August 2011, things got particularly busy (numerous trips, photo outings, and other things), my laptop hard drive became filled to capacity (Aperture and even the OS ground to a slow crawl as space for page swaps became virtually(pun) non-existent), and my habit faltered. September brought the return to school (numerous variables there) and October saw the end of thedailyshoot (after 690 prompts, it folded on October 6th, 2011), and by that time, the habit was upset. Despite a couple of attempted jump-starts (drives to visit the Muse Tree, for example, and the arrival of a new 2012/366 self-challenge), the daily practice of shooting and posting a photo to flickr had been disrupted.

(Perhaps, I should also acknowledge to myself, in hindsight, that I had become engaged in the fall of 2011 with a new regular (though not daily) practice of broadcasting on #ds106radio …)

At any rate, very shortly after January 1st, 2012, @timmmmyboy tweeted out a few test posts related to something new, TheDailyCreate, which would provide a daily prompt, not always for photography, but also for audio, video, and other sorts of creative inspirations. After providing a few test posts, I saw the value in this new prompt source, and decided to try it out.

Skipping forward over February – June, we arrive at July 11th, and what do I see but a challenge from the @cogdog , somewhat uninspired by the recent summer engagement in TheDailyCreate (yes, folks are on summer holidays, relaxing, BUT you still need to nurture that daily creative habit, folks — and to that I can attest!), and so he presents a seven-day challenge. Do the daily create for the next seven days. Starting today. Starting NOW. 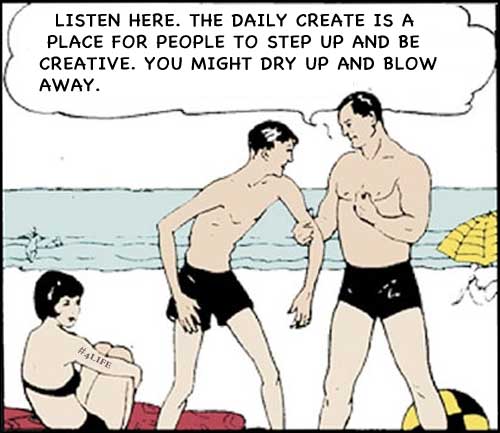 Now, a couple years back, I employed a “follow 30 people for 30 days” mantra when introducing new folks to Twitter, as a way of helping folks “see, over time” how the social media service could be supportive of their work as educators. And if I recall correctly, research somewhere has indicated a “23-day” adoption period during which a daily application of a routine will result in the forming of a new habit.

So I’m going to prematurely suggest that once you meet Alan’s seven day challenge, you repeat it, twice more. I figure 21 days ought to be close enough to 23 days for you to get the gist. And at that point, why stop?

One caveat. You may find yourself pushed to complete some of TheDailyCreate challenges. I would suggest that if you struggle with one of them, go back in the Archives and complete another one from that same category and post it, with its respective tag, instead. While I’ve not employed that strategy yet, I’m going to deploy it starting today.

In response to Alan’s visual seven day challenge, I reply: 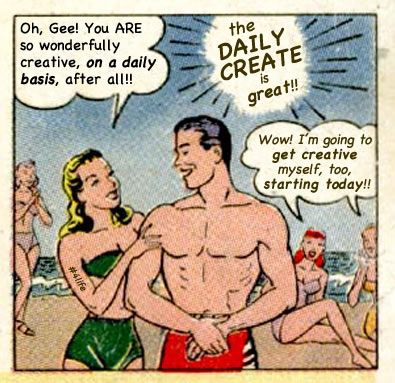 “Twenty-One Days to a Creative Habit” by aforgrave, on Flickr

Get your create on! Get it on on a daily basis. The Daily Create can get you started.

BTW, two days ago, I replaced the hard drive again in my laptop. I’m currently starting out the summer with a glorious 620 GB of free space on my drive. Yesterday, I managed 200 photos on my Sony, and when the battery ran out, I took another 108 on my iPhone. Both batteries are now recharged. And I just “created” that cartoon.  Time to draw a Tornado. (There are currently seven posted. Will you add yours today? Now?)

Jack, You’ve been Working Too Hard