“One day, perhaps on a short stroll during your lunch, you take a side street that you’ve not taken before, and come upon a store. Like a lost memory from your childhood, it’s a bookstore of nostalgia, squeezed between a barber shop and a shoe-repair nook, from a time before the big-boxes and Kindles and e-readers took over. In a dark and dingy corner, you lose yourself, amid glorious heapings of precious, musty paper — and discover, well-thumbed and studied and marked, …  a treasure … from the Twilight Zone.” 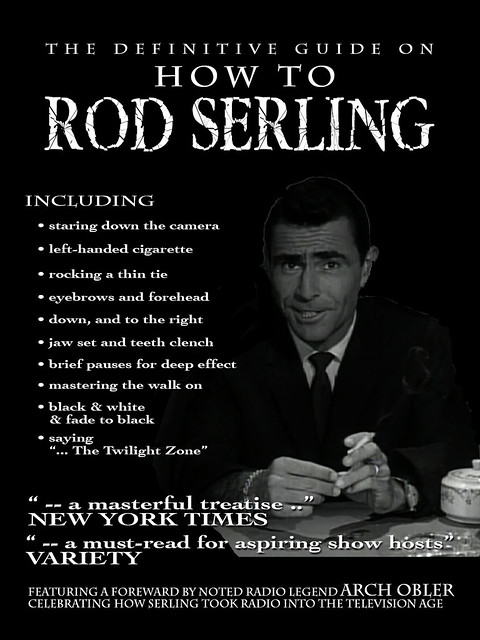 I spent a good 10 minutes trying to find just the right image of Rod Serling on the Google Images, but many were too blurry and unclear. In the end, I used MPEG Streamclip to capture some frames from the Nick of Time episode and selected one that seemed to reflect a key number of Serling’s on-screen characteristics. I used the Magic Wand tool and the Eraser tool in Photoshop to remove the background and superimposed the shot on a black background. The fonts are Charlemagne Std, Cochin, and TwyliteZone, the last available free from fontspace.com.

I’m trusting and hoping that de-constructing a bit of Serling doesn’t take away, but rather add to one’s appreciation of his work. His introductions are so uniquely Serling that they form an integral part of The Twilight Zone experience. I’m sure there are other “Serling bits” that will come to light as the ds106zone continues — maybe we’ll find a 2nd edition of this release wandering out of the ds106zone later in the course.