After reflecting on the pure fun of collaborating on “A Nice Light Snack” at Educon a couple weeks back, Rodd Lucier and I decided to respond to Ron Miller‘s suggestion that we capture my habitual visits to Apple Stores in the form of a children’s picture book. Following a short drive to the Square One store on Thursday, we captured a number of photos that would loosely provide for a narrative. Rodd then surprised me with a first draft at around 10pm, which I immediately shared with the tweeps around the table.

By this morning, the invitation to remix/contribute had been issued, and very shortly thereafter a revised, rhyming version of the story arrived from Karen Littlewood. Karen’s alternate text is posted below the book.

After reviewing the initial draft, and adding a few more pics, we then decided to stop by the Sherway Gardens store to re-shoot a couple pics and add a few more bits. We then spent time fine-tuning the text and sequences, and the following picture book is the result.

Andy At the Apple Store

One day Andy went to the mall
There was an apple on the wall
Andy wondered what’s inside
It was unlike any apple he’d ever spied
he felt like he was being led
then the glowing apple was on his head!
He thought and thought and thought some more
Then took a step inside the store
The store was like a tekkie fair
On the wall, a Macbook Air
Andy saw an iPhone 4
And a wall of programs in that store
Cords and cables far and near
Beautiful headphones so he could hear
Little shuffles in colours bold and bright
And free Internet, time to check some sites
Andy sat and played a while
That Mighty Mouse sure has some style!
The pics in the game made him stare
Then he got a sticker for playing fair
Andy looked at the man in blue
He knew he had one last thing to do
He could help the customers too!!
One last pic in the Apple store
We all know Andy will be back for MORE!!

The final book underwent a couple of edits after Karen shared her text (a few extra pictures, some re-ordering, and a few wording changes), but you can see how this idea could be reworked for students at various levels.

With my preoccupation with #twHaiku, I’m considering taking a run at re-working the text from that perspective.

Rodd has shared the original photos on flickr. Of course, with a camera (we used an iPhone), a presentation program (Keynote), and a little time, you can create your own story! 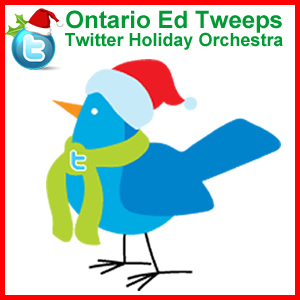 juxtaposed tones something made