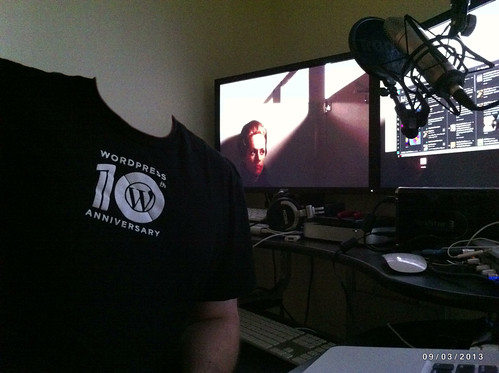 And, for those looking for a little more, here’s a GIF version:

The instructions on assignment page for The Daily Create tdc604 provide just enough simple direction to make this a great little task.

Here some hints- take your own photo, then step out of the frame, and take the exact some picture without you in it (having your camera on a tripod or in a fixed position on a table helps, as does knowing how to use a self-timer on your camera). Use a photo editing program that uses layers- e.g. GIMP, Photoshop, or the web editor pixlr. Put the photo without you in a lower layer. Use the eraser tool in the upper layer to remove your own head.

I used a the timer in the PowerCam iphone app, together with a glyf iPhone camera mount and a Joby Gorilla Pod to capture two photos, one with me, and one without. Importing both images into Photoshop as discrete layers, I made a copy of the one with me in it before deleting the my head using the eraser tool. I also erased the wall behind me in that photo so that the reflected light off of the wall would be consistent whether my head was there or not. Once the .jpg for flicker was exported (I went with a 1200 pixel width), I then re-introduced the original layer that still included my head and made several duplicate frames with the head-included layer increasing in transparency from 0% through to about 30% in 5% increments. Duplicating those frames and reversing their order then gave a sequence where my head becomes increasingly more transparent until it is once again invisible. I then fiddled with the timing to give a 5 second period where there is no head, followed by a brief interval where the head becomes visible and then transparent again.

As with many GIFs, having minimal movement for the things you want to keep consistent is a key — starting with two images taken using a tripod was a huge help. Multiple frames with additional movements could result in a more complex stop motion. But that would be for another day!

A NOTE ABOUT THE GLYF Tripod Mount & Stand:

I’m happy to see that this product is available through Amazon. When I first encountered it, the Glyf was a Kickstarter project and was the first Kickstarter project I ever funded. Such a wonderful vision, process, and resulting product — I carry my Glyf to this day in my backpack camera bag and it works wonderfully for those instances when an iPhone photo needs the support of a tripod or a timed-exposure. Like today!

Design ds106 imaginages something made