The ground-breaking Myst, developed by Cyan and first released in 1993, was built initially in the Apple’s Hypercard development platform, and lead the pack for a close to a decade as the number one computer game. Unlike a lot of other games of the time, Myst was spatially immersive, and led players on a first-person hunt through a series of mysterious, and glorious book-linked worlds. With astounding days-to-render images, haunting ambient music, and embedded Quicktime video/animations, the game sent players deep into another space and time.  All told, by the time the game had run its course, there were five games in the series, and a whole raft of novels and books that helped, to some extent, provide some of the backstory between the cracks in the worlds. Check out the details of Myst’s critical reception. “Marathon” — Lava was dangerous there, too.

After Myst, came Marathon. For those who remember the rise of first person shooters in the nineties (John Carmack’s id produced the top-selling shooters on the PC platform, Castle Wolfenstein, DOOM, Quake), Marathon was the FPS of record on the Mac platform. It was developed by a Mac software house by the name of Bungie (yes — THAT Bungie), who set the game on desolate spaceships and planets, and featured human survivors battling alien creatures. The ambient soundtrack and the lighting and textures made for some heady nightmares, and again promoted an immersive experience which allowed players to spatially seat themselves within the world. Along with the shooting and jumps and leaps, the game also featured many unique and challenging puzzles (unlike most other FPS games) which required considerable kinesthetic mastery to move on to the subsequent levels. In addition to an expansive storyline replete with bots and AIs, the game produced two sequels (Marathon: Durandal and Marathon: Infinity) , and in the final release, a map and world editor, named Forge and Anvil. I remember the wonder of creating a world file in the 2D editor, and then opening it from within the game engine and seeing it rendered in three dimensions. My world. With the release of the world-editing tools, teams of players began to create and share incredibly complex maps, textures and storylines in the early days of the public Internet. Read more about the Marathon Trilogy. 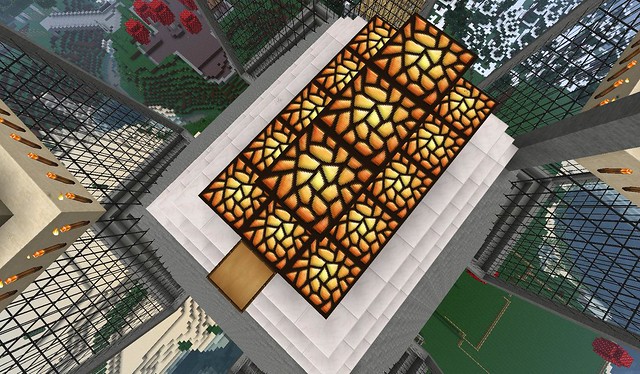 “View From The Horsie Field Castle Dome” by Gumby Blockhead, on Flickr

Fast forward to Minecraft, introduced to me by my sons in 2011 as a wonderfully creative game on iOS, and then extended by my students at my school as a fantastic networked world on the desktop platform. Following a blocky summer spent partially at the ds106 Camp Magic MacGuffin, and a couple of subsequent years exploring and creating in the GamingEDUs Professional Play server, Minecraft has been, recently, my game of choice. As with Myst and Marathon, the game is spatially immersive, and leads to perceptions and memories of the worlds just as if they were First Worlds through which you have moved. The game is structured to support a wide range of user-developed plug-ins and mods, and is served up far and wide to players throughout the Internet.

While Myst was essentially a fully-rendered, still-imaged puzzle to be solved, Minecraft is at the other end of the spectrum — an open-ended infinite space with all the pieces needed for the ultimate creative experience.  While online collaborative play started to emerge towards the end of Myst, and Marathon supported 8-person arena maps, Myst is a fully-fledged potentially-massive online gaming environment. If you build it, they will come — and help you build some more.

When The Good Gets Bought Out

There’s been word circulating on the Internet for a couple of weeks now, in the form of rumours that Mojang (the company behind Minecraft) has been in talks with giant Microsoft. The word was confirmed today that Microsoft has indeed acquired Mojang (and Minecraft), and a good deal of chatter on the Internet about what this might mean.

It should come as no surprise that I am not about to stop playing Minecraft today simply because it has been acquired by Microsoft. The Minecraft client of today runs just fine on my Macs, and I am able to download and run the latest releases just fine.  For the time being, I can see continued benefits to using Minecraft with my students and as a personal creative outlet.

But I worry a bit. You see, the press release issued today by Microsoft includes the following statement:

Microsoft plans to continue to make “Minecraft” available across all the platforms on which it is available today: PC, iOS, Android, Xbox and PlayStation.

Is Microsoft being intentionally vague when referencing “PC” by neglecting to mention the Mac? Will support for non-Microsoft platforms start to lag behind?

You see, there is a daunting precedent hiding in my story.

Will Minecraft Thrive under Microsoft?

Remember Bungie, producers of that Mac FPS game Marathon I spoke about up above? In the late nineties, the Mac game developer Bungie was preparing a new game — and the game wowed Mac users on stage at MacWorld as part of a Steve Jobs keynote . However, shortly after that conference, Bungie was bought out — by Microsoft. And the game — known as HALO — became the flagship game for Microsoft’s new gaming console — the XBox. HALO for the Mac essentially evaporated.

We can hope that Minecraft will continue to enjoy the support under its new owners. I’d hate for the Minecraft world to get smaller. It really should keep getting bigger. But time will tell.

I attempted to get into Minecraft this evening to take a screenshot or two for this post. But I had no luck. Some one set us up the TNT.

“Somebody Set Us Up the TNT? by Andrew Forgrave, on Flickr”