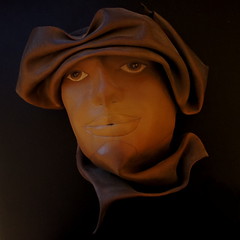 Back in March, Danika Barker (@danikabarker) got a troupe of us together to act out Hamlet on Twitter for her English classes. Over a span of several weeks (leading up to and following the re-enactment) a number of us took to the (stage) wings to create contemporary representations of the characters. As documented in my original post on the topic, my spear-carrying rampart sentry character Marcellus_01 came to be, and we started to explore how we were going to make the thing happen.

To say that the experience was a blast would be an understatement. It was wonderful!! For the duration of the play (maybe six weeks or more), my TweetDeck monitored not only my day-to-day Twitter account and #tags, but also the account of Marcellus_01 and the related #Brevity/Hamlet cast list.

Early on, the Marcellus_01 effect had me reflecting on my own experiences with Shakespeare, and reminded me of my long-forgotten fondness for speaking in Iambic Pentameter.  Periodically, Marcellus_01 would tweet in that form. Original words, mind you, and using mostly contemporary vocabulary.  Old skills come back to me in record time. Marcellus tweets in rhythm and in rhyme.

As the days progressed, the character of Marcellus_01 became fleshed out, and he began to take on a life of his own. He shared a few pictures of his surroundings via TwitPic. (That had me travelling a couple times to Fort Henry in Kingston (my local stand-in for Elsinore Castle) for couple photo sessions. One of them happened to be on the night of the Supermoon, so our respective agendas meshed nicely.)  But he started to use social media, beyond Twitter, like real folks do.

Marcellus_01 started talking about his favourite Danish rock band, Mew, and shared his favourite songs via Blip.fm. Gee, before Marcellus_01, I didn’t even know of any Danish rock bands, let alone have a favourite one. Now, Mew grace my iTunes playlist, and give me fond memories of walking the ramparts of Elsinore Castle at midnight. I haven’t heard from @FranciscoFears recently, but maybe Mew are a favourite of his (actually her) now too? Who knows? 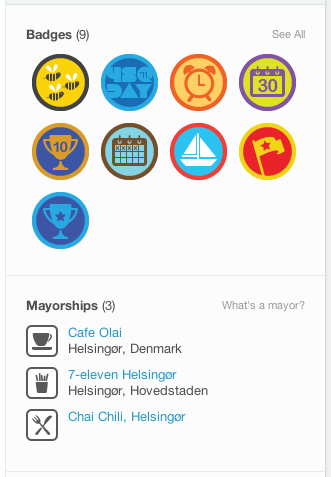 Then there was the day when Marcellus_01 simultaneously celebrated his promotion to Captain of the Guard (I think that was in the play) and achieved status of Mayor at Elsinore Castle on FourSquare. Happy times! He wandered the streets of Elsinore, visiting cafés and shoe stores (in homage to the alter egos of @Horatio_79 and @FranciscoFears) and met up with other players for refreshments and important, plot-advancing conversations. Marcellus_01 later on took a boat ride and earned the “I’m on a Boat Badge,” along with a bunch of other mayorships. He and @cool_court_chik almost managed to play a round of golf at the Helsingor Golf and Country Club, but they missed each other by a few minutes. But he had fun with that FourSquare thing. As for me, I developed some familiarity with the streets in Old Elsinore. It would be nice to visit there someday. We’ll see.

Then, there was YouTube. Along with the other media that characters were creating to support the unfolding of the play (Kristine’s news report rocked!), Marcellus_01 played his part in documenting the pivotal appearance of the Ghost Father in the opening act. He posted a live feed from the Elsinore security cameras, as well as his own HelmetCam footage of his encounter with the Ghost.  Man, that was scary.

Later on, as the plot advanced, Marcellus_01 continued to walk the ramparts. Even though he does not  officially appear in the play after the first Act, Marcellus is also one of the few characters that does not get killed off in the play, and so Marcellus_01 stuck around to help @Horatio_79 when needed, especially with security for the poor, troubled @luvsick_ophelia. Some nights, when action around the castle was a bit slow, Marcellus_01 would order out for pizza from his friend @AnchovieMan. He also ran afoul of one @Elsnr_Albatross, who seemed to have a personality not unlike that of the @BronxZoosCobra, who seemed to be all over The Twitter at the time. So that was all fun.

After all the royalty died (and the play ended), Marcellus_01 left Elsinore, and started to travel the world. He seems to have managed to get some temporary work in London, as he was working security at Westminster Abbey on the day of William and Kate’s wedding (he got the swarm badge on FourSquare that day). After that, he seems to have travelled (perhaps by ship?) to Iceland, before arriving at the ECOO conference in Toronto this past October. 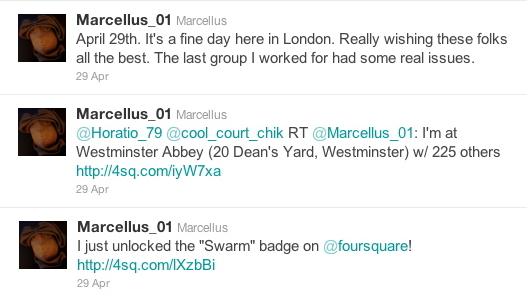 Marcellus_01 has had quite a life. And although he’s not currently treading the boards in support of an online rendition of Hamlet, I do like to think he’s out there, in the world, roaming…

A Bit of a Dilemma

And so, last night, a bit of a dilemma reared it’s head, when Danika emailed us all about her next iteration of Hamlet. She’s planning on having her students play out the characters this time, — and I was suddenly confronted with the challenge of saying goodbye to my Twitter friend.  My immediate reaction surprised me: Rather than simply handing over the keys to the Twitter account, I felt like I needed a bit of time to think.

Shortly thereafter, these words were writ:

I am feeling all torn ’bout all of this.
Marcellus, he is Shakespeare’s, and not mine.
For I am but an actor who has played,
Naught but a bit part on the Twitter stage.

Oh, AAAAAAGGGG. Avast, and out, ye wretched soul.
Depart, and let me have mine peace, anon.
And yet, you have become a part of me,
And I, of you, am still yet strong imbued.

WHAT SHALL I DO? This part, is part of me.
And now roams freely on The Earth, you see.
For whether FourSquare or the Blip.fm,
Marcellus_01, he doth visit them.

Perhaps a surrogate can take up with the role?
Fascimile or shade to tweet the words?
To break yet carry on tradition. Nice?
Methinks an _02 suffix might suffice…

@courosa stars on CBC’s The National 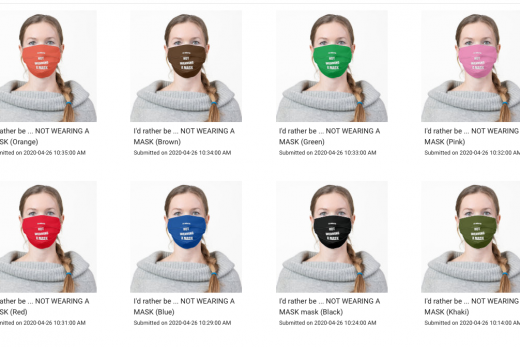 Design ds106 something made

I’d rather be … NOT WEARING A MASK