How would you like to have the support of  seven classic authors sitting at your table, collaborating with you as you compose your next great piece of writing?

My friend and colleague Doug Peterson has a new blog post waiting every morning at 5:01 am, and this morning’s post prompted me to immediately launch the web browser on my iPad to test out his latest find on the web, Google’s demo Masters Edition.  Shortly thereafter, I was sitting at my computer, running a screen capture as I pounded out the opening lines to my next great epic.

Now granted, I didn’t give The Masters a lot to work with. And I would assume that in their day they needed editing for context and syntax in their writing, too — in this instance, their contributions didn’t necessarily always get the gist spot on. Perhaps I was expecting that their additions would automatically improve the quality of the writing piece, and rather, need to see them more as collaborators, merely contributing suggestions. It must be up to us as the writer to make the final call.

Here is my tentative text, augmented with colour to highlight each author’s initial contribution. You will note that a couple of extra lines were added by Poe and Shakespeare after the video capture was stopped. Clearly, those two weren’t paying attention at the time.

It was a gloomy and stormy night. Snoopy comfortably esconced huddled over his typewriter. That dratted Black Baron was up to no good again.

Suddenly, Woodstock as well as his tiny little yellow friends appeared, flittering around the dog house, attempting to cheer Snoopy up.

Under the canopy of darkness, it was a town of unnatural red and black like the painted face of a savage, the triplane of the nemesis of all good. “What shall I do presently?” imagined Snoopy, as he lowered his goggles and wrapped his scarf tightly around his neck. “This wilt be the undoing of me and my tiny little feathered friends!”

As the shining eye of heaven rose, and Snoopy’s Sopwith Camel rose into the sky and headed into battle, the birds began to issue forth their morning war cry, and the day was good. I wish I could write as mysterious as a cat. … Let not sloth dim your horrors new-begot.

Tally and My Assessment of the Contributions

I’ve indicated below my take on the contributions (how many of their suggestions “might work” out of the total number of suggestions offered).

While I don’t know that I would select any of Poe’s suggestions specifically, at least, “gloomy,” “as well as,” “presently,” and “imagined” kind of fit into the flow. So half a point each.  But changing the Red Baron to the Black Baron is right out.

I would be remiss if I didn’t give Shultz a nod:
• Shultz Great characters, that dog house setting is a little sparse.

So. This initial attempt results in a question. Would a longer engagement with the Google Docs: Masters Edition result in improved product? (Maybe a bit more engagement on my part might help?) Perhaps the act of contemplating the suggestions of others is the intent — whether their suggestions themselves are incorporated, or rather simply serve as springboards, and create pause for reflection.  Would I press on with more formal narrative writing, looking to see improvement from this tool? Or is it more of an amusement?

Perhaps you can give it a whirl and offer your own thoughts? 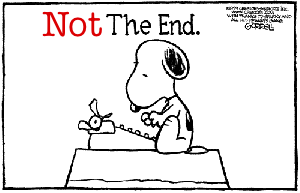 By the way, while a search on Google resulted in multiple instances of Shultz’s image of Snoopy typing “It was a dark and stormy night,” these two images both came from a post titled “11 Great Writing Tips and Overcoming Writers’ Block.” FWIW.

If you are interested in seeing the real time authoring, I’ll be posting it to the Youtube.

@courosa stars on CBC’s The National