A week ago, Alan Levine tweeted out a challenge to accompany a summer downturn in the number of submissions to The Daily Create:

Who's up to Daily Create challenge? Who can do 7 in a row starting tomorrow? Are you weak? Afraid? I dare ya http://t.co/unepFusm

With visions of screaming drill sergeants and mean, sand-kickers going medieval all over everyone’s case, I decided the best thing to do was to play along and do my best to meet the challenge, and encourage others to do the same. Alan’s Charles Atlas comic taunt was sufficient to prompt a similar Charles Atlas response.

I was out of town during most of the intervening days, but with pretty much everything I needed in my backpack (with the exception of my USB mic, which was with me in my wheelie bag), the bits and pieces necessary to keep pace were close enough at hand. Tethering to my phone let me post from my non-internet enabled location.

I’ve already written about this one in “Tornado, Revisited,” but here again is the “drawing,” and then my subsequently animated GIF-version of the drawing process.

My little holiday get-away had me hanging out on the south shore of the St. Lawrence river in Québec near Rivière-du-Loup, and walks along the beach during low tide were part of my daily practice. While collections of a variety of items, including “sea glass” and other human artifacts were of interest (a couple great stories to come over the next day or so), there were also wonderful opportunities to get images of nature, undisturbed. 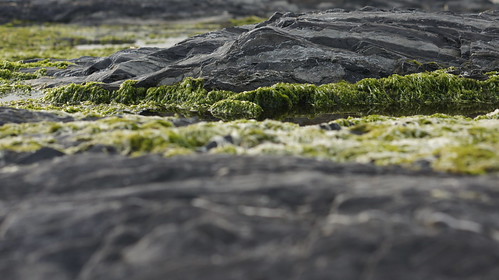 I snapped this image using my new 50mm lens, and later marvelled at the wonderful detail captured in this pic. Check it out in a larger form. On Monday, while in Ottawa (and dropping by the Rideau Centre Apple Store) I took a moment to view this image on a new MacBook Pro with Retina Display. Wow. Amazing.

This one was a natural “make it yourself” opportunity, since there was neither Internet nor Cable (and thus no Channel 106) where I was staying during the week. Although I sorted out an idea (based on a photograph I took on the beach), plotted an outline, gathered the footage, wrote a narration, and started to translate it, there wasn’t time on Friday to complete everything (a short film, entitled “Sur la plage”), and so what I edited together (while on the bus to Montreal on Saturday), wound up being a channel-surfing excerpt entitled “Les Escaliers” — a portion (and actually, only the final paragraph of the thirteen-paragraph narration) of the concept. Good thing my time was limited. The short film would have been waaaaaaaaaaay to much for The Daily Create. As it was, this took hours.

Kudos to Spencer (@robertssw87) for the channel surf inspiration. I switched it up with a bit of a rationalization behind the meaning of the “ds” for Channel ds106 on cable. And waiting for the “static” file to download over my tethered connection while on the bus heading towards Montréal was worth it in the end.

While many of my TDC items early in the week were influenced by my visit to the beach, this one wasn’t. This attempts to include some of the more annoying aspects of recorded messages which I get — most notably a continually received message that always starts in the middle of the message loop. I’ve also incorporated the content from a regular spam text/email notification that my Android phone number (don’t have one, likely never will), was randomly selected as a winner for a free MacBook Air w/2 TB drive (out of stock). I know you can’t get 2 TB notebook HDs yet, and pretty certain you can’t get 2 TB SSDs yet either.

Just as the Of Bananas, Coconuts, and Organ Grinder: The Influence of Monkeys on Human Civilization radio show earlier in the course was an opportunity for me to get some familiarity with Audacity (rather than my usual tool-of-choice, GarageBand), I took advantage of this Create to practice those same skills. I’m liking Audacity more and more.

By the time the prompt for this Create had been posted, I had arrived in Montreal.  My initial inclination was to choose from between the iPhone (likely contender), iPad, MacBook, or Sony NEX-5 camera, technologies I enjoy using on a daily basis. But that’s not what I wound up choosing, as Karen (@KarenJan ) was quick to notice:

it’s not what you think. “@aforgrave: “Technology I Can’t Live Without” http://t.co/RYq0bbxB #tdc189 #ds106 #sevendaychallenge @cogdog”

I’d been spending some time working on learning to make my first cinematic animated GIFs (still working, but a post coming soon), and had been thinking a lot about my once-most-favourite movie, Ridley Scott’s 1982 Blade Runner (it lasted as the fav for almost 20 years, and is likely now my second most favourite, supplanted in the early 2000s by Ang Lee’s  Crouching Tiger, Hidden Dragon.)  When I first saw Blade Runner, I was living in Toronto (now the most populous city in Canada, fifth-most in North America). At the time, the incessant rain in the film, together with the ongoing images of decaying buildings, made me ponder the question, “Where would I (along with the millions of other folks in Toronto) go to get water,” if suddenly one day I turned the tap, and nothing came out? And this was before the modern commoditization of (un-sparkled) bottled water.  It wasn’t too many minutes after reading the prompt that I had my “technology I can’t live without.”

Walking around the city of Montréal that day, in an incredible heat, and climbing all the way up the switchback paths to the summit of Mount Royale served to provide wonderful grist for my iPhone video camera. As it turned out, the heat the next day in Ottawa only served up additional images, and so this little Daily Create turned into a bit of a mega project. The spoken commentary at 2:00 minutes was done in one take — I edited it a bit with Audacity to remove a couple “ums” and some slightly-too-long “thinking gaps,” and then layered it back over the original video for that segment back in iMovie.

Having this TDC lens in front of my eyes for the day was a prime example of how The Daily Create can really jump start your creativity. Despite the time spent on this one, I really enjoyed putting this together. The free water handed out by the Vitamin Water folks was pure serendipity (wonderful shirt!), and the contrast provided by the vending machines at the summit of Mount Royale — and that long red hose watering the flowers, presumably pumped all the way up from the river level in the city far below — were moments of pure “found example” joy. The non-functioning “dry” fountain at the end was a great closer to punctuate the message. And the title of ‘s song from Jamendo is just another wonderful little bit to make this work.

By the time this one arrived, I was back home. And a bit tired. And certainly hot. So it wasn’t much of a stretch to join up Brahms’ Lullaby (I went with an anonymous MIDI version to avoid the potential of hurting anyone’s feelings with the manglement) and the fan, duking it out for the loudest influence on the pending sleeper. Clearly, the sleeper (me) won out in the end.

The reality of the pending Seven-Day-Challenge Mashup hit this morning, and I toyed with the idea of returning to the tdc189 “Technology I Can’t Live Without” iPhone “attraction” as a means of tying the week’s work together, as a chunk of it was facilitated by the phone.  I also spent some time grabbing some video from Minecraft — scenes of how the critters there are attracted to wheat (it’s fun to run in circles and have a mass of chickens chase you), and how pairs of animals will be suddenly attracted to one another (and make a little baby animal) when you feed each of them a sheaf of wheat.  But then I found myself shooting pics of coins attached to the magnets in my pdo iPhone case. And as I moved around the room seeking some better light, I suddenly found the inspiration in shadows and location to create something more than just a photo of some coins stuck to my phone. 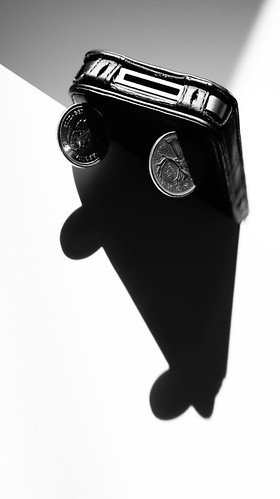 Still, the photo alone seemed like a bit too little effort for the seventh day of the challenge, and I was inspired with @cogdog‘s enthusiasm to generate interest in The Daily Create, and so I spent some time turning the image into a poster, and then a new ds106 Design Assignment, #611: “‘Celebrate The Daily Create’ poster”. 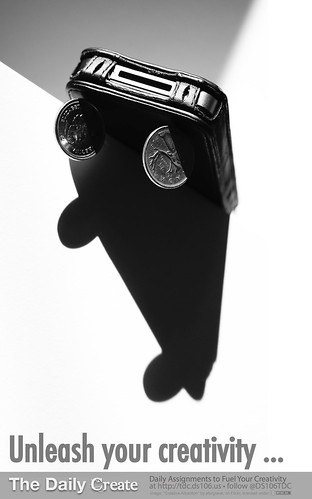 “Celebrate ‘The Daily Create’ poster” by aforgrave, on Flickr

Seven-Day-Challenge Wrap Up (and beyond)

Given that these items represent the individual The Daily Create elements for Alan’s Seven-Day-Challenge — the next task will be to complete a mash-up of items from the past seven days into some form of narrative, the final stage in completing the Seven Day Daily Create Challenge (and Mashup Thereof).

That, and continuing towards my self-challenged #21daychallenge. As of tdc191, I’m on the 11th consecutive TDC.

Who else is looking to extend their Seven-Day-Challenge towards a consistent daily habit?  It’s fun! Unleash your creativity!

cool tech juxtaposed tones something made

The Ballad of the iPad

commentary juxtaposed tones learning something made

“Rock On” with GarageBand for iPad