Sometimes storytellers need to augment the bare bones of a story to provide the audience with more details and information to get the full nuances of a story. If you’ve seen the Raw and Uncut version of the Jim Groom Animated GIF #etMOOC Special, then you’ll know it doesn’t provide the full story.

As imaginations are wont to do when some information is lacking, I took the liberty of annotating and re-cutting a number of segments of the broadcast into what I imagine it might have looked like, were it not for the intermittent visuals and audio.

Some of the words coming out of Jim Groom’s mouth in the following annotated version were definitely uttered by him last night. Others are provided as either close approximations of what was (or may have been) said, as somewhat-in-the-correct-ballpark estimations of what Jim might have wanted to say, or potentially clever fabrications purporting to fit within the general parameters of Jim’s mind and/or the ds106 creative storytelling ethos.

If you are so inclined, feel free to comment about any key points that might have been omitted, once you have viewed the dtlt archive, or contribute to the discussion on the value of the Animated GIF today as a storytelling device and/or as a art form.

If you wish, you can view the Annotated and Recut version of the Jim Groom Animated GIF #etMOOC Special in a full-screen, full-glory 900 pixels-wide version.

Backstory: I’ve been following the #etmooc chatter for the past few weeks, but have not had the time or energy to really participate the the extent that I wish. However, I have been exploring the animated GIF for the past couple of months via ds106 under the tag #GIFestivus2012 here on this blog — you can see some of my work by following that tag. This little “annotated & recut” project was “just too good to pass up.” 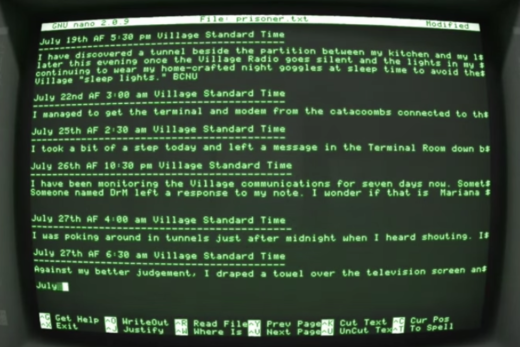 Arrival: In a Pixel Perfect Village