Although recent reappearance in The DS106Zone Trading Cards has generated some interest in the community, it wasn’t until yesterday that someone (Jim Groom) asked about the gum that accompanies the cards. 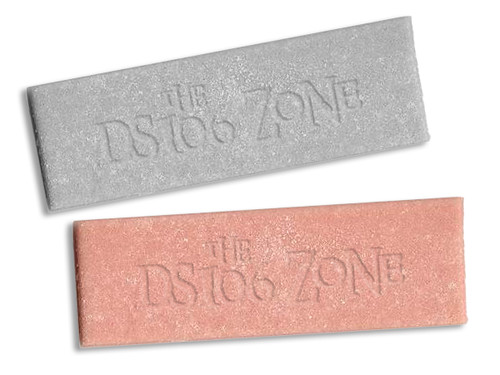 Gum from both the original card series release and the re-issue is still in circulation (we’re talking about mint-condition (not mint-flavoured), unchewed sticks here — there is little collector interest in chewed gobs that litter the sidewalks throughout the world) and tends to command a good price at card shows and fan conventions.

While prized for its appearance and nostalgia, remaining sticks of the original black & white gum from the sixties command a premium price due not to the palatability of the black liquorice flavour (which is poor — the stuff is rank), but due to the novelty — true fans can’t help but shelling out and then chewing a stick for a few minutes, “just to say they tried a stick once.”   You can still see them from time-to-time at fan conventions — the post-chew black lip look is hard to miss.

As for the later, mid-seventies re-issue gum — it is pink, and tastes like any other pink card gum, and thus commands a much lower price as it exists in much more significant quantities, and doesn’t have the must-try-once appeal of the original.  But the DS106Zone emboss still puts it several notches above the un-branded gums, and makes it worthwhile to root through a bulk-bin next time you have a chance at a fancon.