Wishing you the very best for the coming year!!

This animated GIF is made from a series of screen captures from MineCraft, where the sign for 2013 was built during the last two hours of 2012. Rather than using Lego this year (I’ve kept my previous builds for 2010, 2011, 2012 — I’m running out of blocks) this sign was built from hand-crafted sandstone blocks, and decorated with torches and hewn nether rack. Unlike the 3 previous years, where the signs where smaller than me, in this instance (relatively speaking) the sign is several times my height in the Minecraft world. Ladders, climbing, jumping, falling, … and eventually, flying were involved.

Many thanks to EDU Gamer MineCrafters extraordinaire @liamodonnell, @melaniemcbride and @jasonnolan for the wonderful New Years’ fireworks that added so much to the lighting of the 2013 sign. You EDU Gamers truly rock!

A number of different images of the in-world fireworks from various screen captures were composited onto the existing ones so that the final image (with added message) could reflect the true excitement of the transition to the New Year. 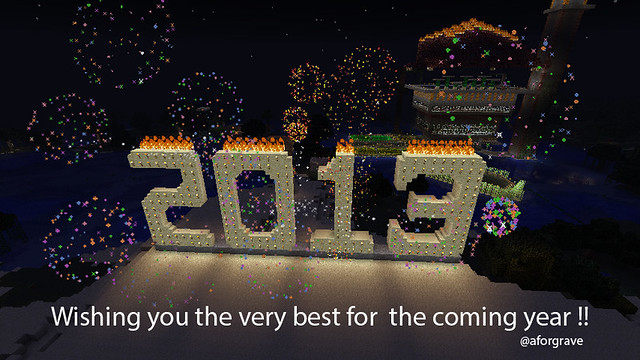 A video version of the animated GIF is posted on Flickr. It’s not as sharp as the GIF, despite being a much larger file.

And so, again, my very best wishes for 2013. Be creative, innovative, positive, strong, purposeful, focused, playful, humourous, happy, collaborative, energetic, insightful, wonderful, sharing and caring … and any other fine adjectives that strike your fancy!!

The year has begun!